AR in 2023: 7 tech trends that will shape the industry

What will 2023 bring in terms of technological developments? Will augmented reality (AR) and virtual reality (VR) go mainstream? Are we finally going to see the arrival of smart glasses that don’t end up making their wearers look like jerks? What other tech trends are on the horizon?

These are just some of the questions I ask myself every year. Then, each year, I try to answer them—and share my predictions on this blog.

It’s now coming to the end of 2022, which means it’s time to look at the year ahead of us once more. Here are seven tech trends I think we can expect to see in AR, extended reality (XR), and the metaverse in 2023.

But first, how did we do last year?

Scoring our 2022 predictions of tech trends

Here’s what we guessed would happen in 2022—and a quick recap on whether or not our predictions came true.

Plenty of these were enabled through headsets such as Snap Spectacles and the newly released Meta Quest Pro. ✅

While terms such as consumer metaverse and industrial metaverse have spawned to delineate between different use cases, the war between companies and movements to claim the metaverse term hasn’t fully blown yet.

Why? In part due to the downturn in the tech sector, but perhaps also due to the recent stigma associated with Meta. ❌

In an end-of-year study, 75% of consumers said they would find immersive retail experiences valuable. This great number reflects that the shift to the try-before-you-buy approach offered by technology such as 3D and AR is already well underway. ✅

From fashion shows in virtual worlds such as Decentraland and Second Life to haute couture dress try-ons through the browser by Ferona, there was no shortage of fashion brands thinking outside the box in 2022. ✅

3D content through capture technologies has moved up a gear with the advent of NeRF technology alongside traditional photogrammetry, making it easier to create large city scale 3D models for example. ✅

Thanks to more devices on the market having support for ARCore and ARKit, search engines integrating AR experiences in the listings, increasing adoption of WebXR, and the growing maturity of open source frameworks such as <model-viewer>, AR has become more available than ever. ✅

Here are seven tech trends that I think are going to shape our industry in 2023.

1. The industrial metaverse will see huge acceleration in growth

The industrial metaverse, including digital twins rendered in 3D and AR, will kick up a gear as the consumer-focused equivalent grows at a steadier pace.

In contrast to Meta’s Horizon Worlds, which has failed to reach its target user base, companies like Siemens, BMW, Mercedes, and Boeing already have operational industrial metaverses—and are reaping the rewards.

For example, the car maker Renault expect that by 2025, its Renault Group Metaverse will help the company save €320m (this doesn’t include the €260m from inventory savings), reduce vehicle delivery time by 60%, and minimise carbon footprint by 50%.

Many of the metaverse applications used by businesses today have been developed (and are run) using NVIDIA Omniverse. In June 2022, NVIDIA joined forces with Siemens to collaboratively create an immersive, real-time industrial metaverse.

Deutsche Bahn, the German national railway operator, is using NVIDIA Omniverse to create a digital twin of its entire rail network (including almost 6,000 stations). The metaverse will allow Deutsche Bahn to monitor its operations in real time and improve the arrival time of trains.

“If there is an obstacle on the track, rather than making a phone call to someone who will have to then re-route multiple trains, the technology on the trains will see that obstacle and then alert other trains that they need to alter their routes,” said NVIDIA’s Omniverse product manager Mike Geyer when describing the benefits of the Deutsche Bahn metaverse.

NVIDIA Omniverse may well prove to be the sleeping giant of the metaverse with a plethora of powerful and integrated tools that enable businesses to optimise their operations very effectively.

2. NeRFs will be used alongside photogrammetry to enrich scans of objects

Neural Radiance Fields (NeRF)—one of Time Magazine’s 200 greatest inventions of 2022—will start to compete with (but ultimately complement) photogrammetry for creating virtual replicas of real-world objects.

To recap, photogrammetry is the process of taking overlapping photos of an object or space and turning them into 2D or 3D models using specialist technology.

On the other hand, NeRF is a new technology that uses neural networks to turn a collection of 2D images into 3D scenes in a matter of seconds.

Unlike photogrammetry, which needs multiple overlapping images from every angle to create a realistic scene, NeRF uses artificial intelligence (AI) to fill in any “gaps” and render high-resolution views of objects and environments.

NVIDIA isn’t just a player in the industrial metaverse space. Its Research division actually invented NeRFs and the technology is being made accessible through companies like Luma Labs and Captur3.

Although NeRFs are better at capturing some aspects of objects (like reflective materials and large landscapes), we are unlikely to see the demise of photogrammetry anytime soon. Instead, we will see the two techniques being used together.

NeRFs will also start to be used for more creative purposes rather than just static scenes.

3. Apple’s mixed reality headset might (finally) be on the horizon

Although predictions of Apple mixed reality headset launching “soon” appear every year it looks like it might actually happen in 2023.

Reports from various publications like Bloomberg, Engadget, and AppleInsider offer more concrete details about an Apple mixed reality headset, indicating that it’s getting closer to reality:

However, even if the long-awaited Apple headset materialises in 2023, it’ll likely be aimed at professionals and developers rather than the mass market. Nonetheless, the headset will serve as a precursor to Apple Glass, which will be more similar to glasses than a bulky headset.

4. Generative AI will start to play an ever more important role in augmented reality

2022 was a breakout year for AI and diffusion models like Stable Diffusion and DALL-E, as well as LLMs such as GPT-3 and BLOOM. Moving forward, we’ll begin to see more and more of these technologies being incorporated into AR experiences.

For example, tools such as Stable Diffusion that automate the creative generation process will be used to build unique scenes that are better matched to requirements on the fly.

Image to 3D, text to 3D, and photo to 3D avatar models will progress from their currently rudimentary forms to enable mass object creation at scale—something creators are already excited about.

While the NFT bubble has well and truly popped (perhaps a hand-drawn MS Paint-esque “test” message being sold for $270k was a clue), the key takeaway for brands is that there needs to be value beyond a digital asset.

One example might be music fans who purchase an NFT being given not only a digital asset but also priority access to an artist’s signing event.

Some brands are already doing this. For example, in July 2022, we saw the launch of the RTFKT x Nike AR Genesis Hoodie.

As Nike’s first NFT hoodie—which the athletic apparel company created through RTFKT Studios, the Web3 fashion and collectible studio it acquired in 2021—the hoodie can be worn by both RTFKT Clone X avatars and real-life individuals who own the NFT hoodie.

The hoodie comes with a near field communication (NFC) chip, which lets it communicate with the digital asset wirelessly, and a QR code on the back which, when scanned, triggers the appearance of virtual wings.

Tommy Hilfiger did something similar when it partnered with the avatar platform Ready Player Me to create a phygital collection of outfits titled Parallel by Tommy Hilfiger.

The collection allows customers to buy physical garments as well as their digital twins (not NFTs). The latter can be worn by their avatars in Ready Player Me games, worlds, and apps.

While this tech trend is most popular among clothing items, in the near future, we’ll see it extend to packaging more frequently.

For instance, RTFKT recently demonstrated how scanning a QR code on a shoe box could show Nike fans different designs of sneakers without even having to open the box.

We can only hope to see more integrated and exciting integrations of digital experiences into physical products from brands next year.

6. WebXR will become the engine of choice for web-based headset experiences

WebXR is an application programming interface (API) that allows XR hardware (mobile phones, headsets, etc.) to deliver and offer interaction with AR and VR experiences purely through a web browser.

What’s exciting about WebXR is that it:

7. Some Web3 metaverse platforms will fail because they lack an attractive USP

While there are many reasons why metaverse platforms like The Sandbox attract users (endless exploration, personal development, playing games etc.), the ability to earn crypto is definitely one of the main ones.

But as the crypto landscape dimmed dramatically last year and price speculation became less of an incentive to invest in cryptocurrencies, metaverse worlds have also become less attractive to spend time in.

Dismal figures around activity for The Sandbox and Decentraland (less than 1,000 “daily active” users on either platform) point to a lack of value being offered to users.

People need a reason to spend time in the metaverse that they don’t get through other channels.

Unfortunately, it doesn’t seem like most metaverse platforms have gotten the memo. Despite what people behind Decentraland might think, the prospect of becoming a virtual landlord in the metaverse isn’t going to solve a fundamental lack of compelling reasons to join the platform—or stay there, for that matter.

A metaverse platform that offers gaming without the depth, connection to others without the immersion, and community without the binding theme, has limited time before it’ll be usurped by those that actually offer unique and valuable features.

Perhaps 2023 will instead bring to the fore some new metaverse platforms with more of a focused offering that attract a highly motivated niche audience?

Whether it’s AR, XR, the metaverse, or something else entirely, predicting what will happen next is never easy. Still, one thing is clear: as both consumers and businesses become more familiar with AR, VR, and XR technologies, we will continue seeing new and exciting developments in this space.
But let’s have a discussion. Think I’m missing an important tech trend? Let me know on Twitter. 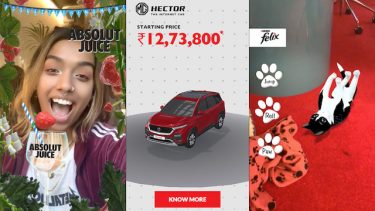 Poplar Studio has closed a $2.6 million investment, led by Fuel Ventures, to push its ambition to become the world’s leading augmented reality (AR) creative platform. The venture has now raised $3.5 million in total funding as it looks to grow the business and further develop its tech. This seed round, which sees Haatch Ventures,...

When the popular video-sharing app Vine was discontinued in 2016, it left a gap in the market that TikTok has enthusiastically and profitably filled. With its rapid rise to popularity, young user base, and informal vibe, advertisers have been eager to take advantage of the new marketing opportunity that TikTok presents.  While TikTok is still...