AR entertainment: 4 great uses of AR in the industry

AR is fast disrupting industries across the board, from retail to healthcare, bringing new and exciting opportunities for brand engagement and word of mouth sharing. The entertainment industry – including film, theatre and museums – are particularly well suited to the benefits of AR, whether the goal is to improve brand recognition or sell more tickets.

The reason why AR is so powerful when it comes to entertainment is because it allows brands to transport users to the worlds and characters they have created, both delighting them and encouraging them to share it on social.

In this article, we cover four major ways you can use AR in entertainment, with examples from the real world. Whether you’re looking for inspiration or you’re simply curious what’s out there, we hope this article can help.

1. Portals: transport users to another world

Portals are among the most immersive types of AR, as they transport users to a location through their phone screen, where they can wander, explore and turn around 360º. If you’re promoting a production that takes place in a particular location, you can recreate this through AR and encourage users to explore it.

A great example of an AR entertainment portal is this portal from Aladdin the Musical by Disney. The effect was commissioned to us to enable fans to enter the ‘Cave of Wonders’ from the musical through their mobile device. Once there, they were able to rub a magical lamp and conjure the Genie.

The portal allowed users to take pictures and share them on social media, and the makers of the musical even ran a special competition promising a pair of free tickets to the most creative use of the effect! This shows how effective AR can be in driving word of mouth sharing and driving more ticket sales.

Face filters still remain the most popular and effective forms of AR, mainly because they are fun and easy to share on social. All you need to do is turn to Instagram and you will see a proliferation of face filters from giants such as Netflix and HBO. The major entertainment platforms are turning to AR for good reason; again and again it’s proving a great way to encourage word-of-mouth sharing and virality.

This is because of the inherently shareable nature of face filters, and the fact that they can so easily be published on social networks such as Snapchat, Facebook and Instagram. Entertainment brands are tapping into their existing followers to share their effects, and these fans in turn are capturing images and videos using the effects and sharing them with their own followers, creating a snowball effect.

A great example is this face filter by the English National Ballet, which they built in order to promote their production of Swan Lake. The face filter transforms the user from White Swan to Black Swan, just as in the ballet. They even got one of the performers, Angela Wood, to take a video using the effect, which was then distributed as part of their promotion efforts.

3. World lenses: engage with fans in the real world and at events

World effects are similar to face filters, except that they use the back camera instead of the front camera. They allow users to place 3D objects in their real environment and to engage with them.

Although not exclusively, they are particularly well suited for events and in-person experiences, such as conventions, events and in-store interactions.

A great example is this effect from NBCU, which was used to promote a new show, Eleven Eleven, at Comic-Con London. The effects were promoted at their booth and allowed users to place two characters from the show in the real world and take photos of their friends with the characters.

This kind of in-person experience is great because it makes the brand engagement experience much more personable and adds an element of fun to the long waits that are sometimes an inherent part of these events.

Finally, a really exciting use of AR that we are seeing more and more is augmented posters, print magazines and books. This allows users to scan a particular page from a magazine or an advertisement poster in order to augment the image and access additional information.

The BBC came up with a great example of this kind of effect with their recent Snapchat Lens, which they created to promote their show His Dark Materials. The billboards they used to promote the show contained a Snapcode. Once scanned, the app detected the poster as the target image and augmented it, making an armoured bear emerge from it and give a mighty roar.

From face filters to portals, world lenses to image trackers, Snapchat to Instagram, there are so many potential uses of AR entertainment efforts to choose from, making it an incredibly exciting time to dip your toes in AR.

If you have an idea for an AR effect that you’d like to create, or you simply don’t know where to start, feel free to reach out to us here and we’ll be happy to answer any pressing questions. Or for a fuller picture of AR can help you, feel free to download our free guide now.

When the popular video-sharing app Vine was discontinued in 2016, it left a gap in the market that TikTok has enthusiastically and profitably filled. With its rapid rise to popularity, young user base, and informal vibe, advertisers have been eager to take advantage of the new marketing opportunity that TikTok presents.  While TikTok is still... 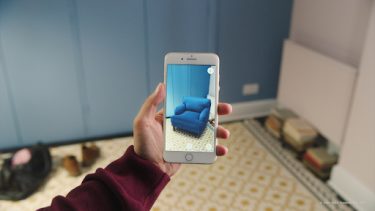 Shopping for furniture and interior design has never been easier — and it’s all thanks to augmented reality technology.  Although not yet mainstream, many homeware companies are already developing 3D models of their product catalogues and offering customers the ability to visualise life-size examples of furniture and home decor pieces in their own spaces before...