“Augmented reality is transforming museums,” writes Miranda Katz for Wired. What is notable about her article is not just how well it’s written, but the date it was published — 2018, well before the pandemic. While it is true that COVID-19 forced many museums to rethink how they operate and exhibit their collections, the fact is that museums were struggling with visitor numbers long before the global crisis made people wary of entering public spaces.

According to a report by the British Department of Culture, Media, and Sport, visitor numbers to UK museums and art galleries between 2015 and 2016 fell by millions. To entice people back, some museums turned to augmented reality (AR). With global museum attendance dropping by a shocking 77% in 2020, it is likely that in the near to medium-term future, even more museums will experiment with AR to enhance the visitor experience.

For inspiration on how an augmented reality museum experience works, look no further than the five examples below.

1. The Art Gallery of Ontario, Toronto

A mere 17 seconds. That’s how long an average person spends looking at a painting in a museum. Determined to get people to do more than just glance at a piece of art, digital artist Alex Mayhew collaborated with the Art Gallery of Ontario (AGO) in Toronto to create an AR installation called ReBlink.

Through the ReBlink exhibit, Mayhew reimagined some of the most famous art pieces in the AGO’s collection. Visitors to the museum could download a special AR app onto their phones or tablets to see the people within the paintings come alive and behave as if they lived in the 21st century.

Take the well-known painting “The Marchesa Casati” by Augustus John, which depicts the early 20th-century Italian heiress, socialite, and patroness of the arts Luisa Casati. When viewed through the AR app, the heiress holds a selfie stick, something that many young people now do daily. On the other hand, the painting “Drawing Lots” by George Agnew Reid shows three characters absorbed in a game. In Mayhew’s version, however, the characters are on their phones instead. In yet another example, the idyllic Village Scene in Winter by Cornelius Krieghoff turns into a dystopian environmental disaster.

According to Mayhew, the AR-enhanced exhibition was more than just a fun experience. By showing people how much we have and haven’t changed over time, it also offered us a link to the past while at the same time giving us a better understanding of the present. For returning visitors, ReBlink was an opportunity to see the paintings in a new light.

The AR exhibition was such a success that, although it was supposed to be over in December 2018, it was extended to run until April 2019 instead.

The Bone Hall, a display showcasing about 300 century-old skeletons of vertebrates, was always worth a visit. However, in 2015, the Smithsonian National Museum of Natural History upped their game by introducing an AR app called “Skin and Bones,” changing the way visitors can view and interact with the exhibits.

Whereas before Bone Hall visitors had to read the labels, which are full of scientific terminology, to learn more about the animals whose bones they were looking at, they can now see them come to life via their screens.

After downloading the “Skin and Bones” app, museum-goers can point their smartphones at one of the 13 participating skeletons, including a giant sea cow, rattlesnake, vampire bat, and a 150-pound Mississippi catfish, to see what they looked like when they were alive, as well as how they moved, sounded, and even preyed on other creatures. For example, if a visitor points their phone at the bones of anhinga (or snakebird), they will see how it catches fish right in front of their eyes.

Crucially, visitors don’t need to be standing right next to the exhibit to see it come alive. The app works from a few feet away and also at odd angles, which means that crowds are not a problem. Unsurprisingly, the app had a notable impact on the visitor experience. Diana Marques, who helped develop the “Skin and Bones” app, said that visitors who saw and used the AR content stopped more often and stayed longer at the exhibits. Perhaps more importantly, they rated their overall visitor experience better than those who did not interact with AR. The app also works from home.

Besides AR experiences, the “Skin and Bones” app also explores scientific ideas and includes interviews with the scientists that study the animals as well as games and interactive activities.

Smartphones often facilitate AR experiences, but using a device to create an AR experience isn’t necessary. Earlier in 2021, the Asian Art Museum in San Francisco, California, proved this by opening “teamLab: Continuity,” a nature-oriented digital exhibition that invites visitors to participate in making art rather than just view it passively.

Using projection mapping, “teamLab: Continuity” is an immersive show that exhibits different displays based on visitors’ locations and movements. Within it, images leap from room to room and form new abstractions. For example, as a person traverses the museum, they encounter moving elements like blooming flowers, fluttering butterflies, and soaring crows, which can take on new shapes or grow depending on where people are stepping or placing their hands on the walls.

Crucially, the digital installations are not prerecorded, nor are they on a loop. Instead, they “happen” in real-time, meaning that previous artwork can’t ever be replicated. At the same time, visitors are welcome to return, revisit, and re-explore each work of art, further engaging in “together-making,” as noted by the Tokyo-based art collective that developed this display.

4. The National Museum of Singapore

Combining projection mapping and smartphone-enabled AR experiences, in 2016, The National Museum of Singapore turned 69 watercolour drawings from the William Farquhar (the first Commandant of Singapore) Collection of Natural History Drawings into a giant immersive installation.

Entitled “Story of the Forest,” the interactive design, which is housed in the Glass Rotunda, a three-story circular structure, imitates the tropical rainforests of Southeast Asia.

The exhibition starts with visitors entering a dark room on the top floor, where they are greeted with a projection of flower petals falling from the ceiling. Beyond a curtain is a 144-meter spiral passageway. Descending here, visitors come across a magical digital forest that changes from morning to night and from wet to dry season as they walk along the pathway. But the forest isn’t empty. In the forest, museum visitors also encounter animals that live in Singapore and can use an augmented reality app to learn more about the creatures they come across, as well as “collect” them to create their own animal encyclopedia.

The exhibition ends in another room with an interactive forest that rains petals over the visitors, which turn into trees as they come closer to them.

Who said that you had to visit a physical art gallery to soak up some culture? Earlier this year, Londoners were able to see major works of art on their way to work or the shop courtesy of several London art museums.

In an effort to attract visitors and share their art, the National Gallery partnered with the Royal Academy of Arts and the National Portrait Gallery, among others, to design an outdoor gallery route from Trafalgar Square to Green Park featuring 20 historical and contemporary pieces visible in AR.

Passers-by could scan the QR codes in frames hanging on exterior street walls with the “Art of London AR Gallery” app to activate classics like Vincent van Gogh’s “Sunflowers” and more contemporary pieces like Tracey Emin’s “Trying to Find You 1.” In addition to seeing the physical portraits, users also got an audio commentary featuring the galleries’ curators.

During a time when COVID-19 restrictions forced many museums to temporarily close their doors and people to rethink their cultural activities, AR proved invaluable in connecting people through art in an accessible and safe way. It’s no wonder that the exhibition has been dubbed “the art gallery of the future.”

Getting started with an augmented reality museum experience

As the above museums that have already embarked on their AR journeys demonstrate, adopting an augmented reality museum experience doesn’t require drastic changes. Regardless of whether you run an art gallery or a museum, your exhibition can probably benefit from AR—and so can your visitors.

Creating an augmented reality app for your museum is easier than you think. Contact the team at Poplar Studio to discuss how you can turn your collection, be it paintings, artefacts, skeletons, or something else entirely, into an experience your visitors are unlikely to forget any time soon.

Pinterest AR: how brands can use in their shopping campaigns

With a year-over-year increase of 37% in monthly active users in 2020, brands can’t afford to ignore Pinterest’s audience of 459 million consumers, many of which need only a small nudge to make a purchase. Now, with Pinterest AR, that is even more the case. More than half of visitors to Pinterest are eager to buy... 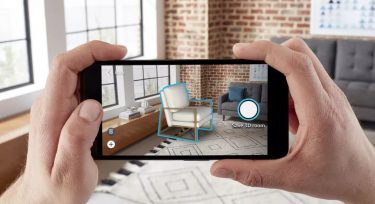 From cars to pretzels, augmented reality is catalysing a transformation in how consumers engage with retail products. However, if you had to choose one area where AR is most rapidly gaining traction, it has to be augmented reality furniture try ons. In fact, research shows that furniture is one of the main products customers want...