Any AR developer will know that the options available today to create meaningful AR experiences are nearly endless. There are many great tools that allow developers with a wide range of skill sets to get started creating augmented reality content.

However, each AR development and publishing platform comes with its own set of features, which can be daunting for any developer new to this space.

Before starting any project, the most important thing to know is what tool is best suited to your needs and skills. To help you gain a better understanding of the features of each of these tools, we have come up with this handy table, covering all of the major points that you should keep in mind when developing for AR.

Each platform has its strengths and its weaknesses and will be best suited to different projects. By consulting this table, you can figure out which one is best for you and the project at hand.

ARCore (Android) and ARKit (iPhone) are development tools that have the support of Google and Apple respectively behind them. This is great if you already have knowledge of their respective languages.

Additionally, when it comes to native apps, ARCore and ARKit have lots of advantages compared to other augmented reality platforms. For example, they allow you to host much larger assets and to develop higher-definition experiences compared to other platforms. They also offer a large number of features including face and image tracking, surface detection and, when combined with external libraries, object persistence.

Native apps do have some disadvantages to keep in mind, however. The two major ones are the barrier of entry and cost. Native apps have a high barrier of entry because they require end-users to download the app on their mobile device. This can put off a large number of people. Native apps also have a significantly high cost versus other augmented reality platforms, mainly due to the need to develop these apps from scratch.

WebAR is becoming an incredibly exciting platform for AR creators and already has the backing of big brands such as Sony, Lego, and Toyota. This is because it brings all of the advantages of the web, including its openness, ease of navigation and widespread adoption, with an accessible and affordable approach to development.

The most appealing aspect of WebAR is its potential reach. All other tools require users to have a specific app installed, whether it’s a native app or a social media app. WebAR, on the other hand, only requires a web browser.

From a development standpoint, it also provides an easy transition for developers by using widespread technologies such as Javascript, Three.js, A-Frame and more. Developers can build on top of this by incorporating additional libraries like 8th Wall, enabling them to include image tracking functionality.

WebAR is clearly a fantastic platform for AR, but it’s not without its challenges. The biggest challenge is compatibility with older devices and consistency of experience across devices and browsers. As the table shows, these can really vary. Framerate and accuracy are also lower compared to other augmented reality platforms.

However, the future looks bright for WebAR, as the WebXR API is soon to standardize and resolve some of these issues, providing a way forward for developers to create AR content on the web.

With around 180 million daily active users on Snapchat, Lens Studio offers developers the possibility of creating content that reaches thousands if not millions of people.

Lens Studio, in fact, targets creators from a wide range of fields, offering great templates, tutorials, and documentation for anyone to get started creating Lenses.

Snapchat Lenses work on most mobile devices (iPhone 4s and above and Android 4.3 and above), offering high accuracy and quality across all these devices. This makes for a high-quality AR experience for everyone.

Additionally, besides the standard AR features found on other platforms (such as face tracking, image tracking, and plane detection), Snapchat offers unique features including pet tracking, body tracking and, now, landmark tracking (which works on famous landmarks such as the Eiffel Tower, Buckingham Palace and more).

Lens Studio is great if you want to create AR content that might potentially go viral on Snapchat. However, it does have some challenges. Currently, there is a 4MB file size limit, which can restrict the types of experiences creators can build. But as they say, the key to creativity is having limits, so it is definitely worth the challenge.

Facebook is a big player in the AR and VR space, marked by both its acquisition of Oculus VR in 2014, and its launch of their own AR creation platform, Spark AR Studio.

Similarly to Snapchat, Spark AR Studio offers a way for non-developers to start building Ar content quickly and easily. To enable this, they have abstracted scripting into a visual tool, Patch Editor, which allows creators to build more elaborate AR experiences without writing any code. Supported AR features include segmentation, hand tracking, face tracking and more.

SparkAR features are currently available on Facebook and Facebook Messenger. However, in the coming months, Spark Effects are expected to become available on Instagram. This means that AR creators will now have access to Instagram’s monthly user base of 1 billion.

On the downside, from what we know the file size limit is likely to be at 4MB or less for Effects on Instagram, which could restrict the types of experiences creators can build. However, overall Instagram is likely to become an incredibly successful platform for AR content creators and end-users alike!

We hope you find this chart useful for any of your future projects. In the meantime, if you’re interested in getting started creating AR content, why not join our community?

The Covid-19 pandemic did not stop people from buying jewellery. If anything, it prompted them to spend more on ornamental pieces. In 2020, a typical US household purchased $475 worth of jewellery, almost 10% more than in 2019. And in a recent survey, three-quarters of consumers said they expect to spend the same or more... 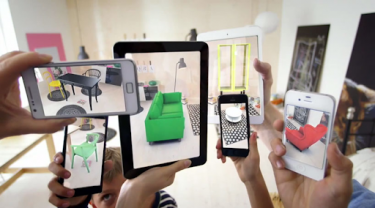 Although we have seen a dramatic uptake in augmented reality (AR) adoption in 2021, as a consumer-facing technology, AR still has massive room for growth. In the long run, a major part of this growth will involve the evolution of new frameworks and even “metaverses”. Indeed, how consumers use AR at the end of this...