According to an international survey on consumer tourism choices in a post-pandemic world, people can’t wait to get back to museums and galleries. However, to cater to individuals who may not feel confident venturing out to an art gallery just yet, as well as those who have embraced new technologies such as virtual reality (VR) and augmented reality (AR), travel/tourism brands need to seriously reconsider the types of experiences they provide.

Static, non-interactive displays that are confined to physical spaces no longer cut it. Consumers are increasingly expecting immersive experiences. According to a recent study, before the pandemic, 56% of people anticipated being able to visit virtual places by 2025, and 78% thought they’d be able to use AR to sample products by 2030. Now, 63% of people expect virtual visits today, and 69% are confident that they’ll be able to use AR to sample products within the next two years. That’s quite a difference! Luckily, there’s no shortage of examples of museums, galleries, and art retailers that have used AR to turn a single visit, whether physical or virtual, into a memorable event.

Steeped in tradition, Sotheby’s, the world’s largest marketplace for art and luxury, is not necessarily a business that you’d immediately associate with being on the cutting edge of new trends. However, Sotheby’s has been embracing AR for some time now and is at the forefront of AR-related innovation in both the auction house and the art world.

Through their AR filters, Sotheby’s has managed to reach younger audiences while also providing fun, engaging experiences for their fans that build brand engagement.

Earlier this year, for example, Sotheby’s used AR to help potential customers visualise in their homes one of the paintings it was selling, Sandro Botticelli’s ‘Portrait of a Young Man Holding a Roundel’. Created in collaboration with Poplar Studio, the Instagram filter was available to Sotheby’s 1.3 million Instagram followers and was used 145,000 times. In this virtual way, the painting “hung” in more than 4,000 people’s homes around the world until it eventually sold for $92.2 million.

More recently, Sotheby’s worked with Poplar Studio to create an Instagram filter celebrating the auction of a royal tiara that once belonged to the Royal Family of Italy. Users could “try on” the augmented reality version of the diamond and pearl tiara modelled directly on the original while at the same time, thanks to the filter’s 360º backdrop of the Palazzina di Caccia di Stupinigi in Turin, explore their new, royal digs. The effect saw almost 1 million impressions and was used 130,000 times before the tiara was sold for $1.6 million.

It’s not just auction houses using AR. Art retailers are finding ways to reach their customers digitally through AR as well. In the case of Murus Art, a disruptive online art retailer created with the intention of making buying art online more enjoyable and inspiring, this meant giving customers the option to visualise art on their walls before making a purchase.

As Murus’ partner in this endeavour, Poplar Studio turned the retailer’s catalogue of up to 800 paintings into 3D models that are true to scale, have realistic lighting, and come in a white frame as offered by Murus. Site visitors are able to view digital artwork that takes their fancy in their living rooms by going to the product page and clicking on the “View On Your Wall” button via their mobile devices. Because the experience uses Web AR technology, users don’t have to download any apps and can get the same result through desktop by scanning a QR code.

For Murus, AR capabilities such as these remove the need for a brick and mortar store and encourage sales even in uncertain post-COVID-19 times. On the other hand, for customers, AR visualisation provides a more positive, engaging experience, leading to increased conversions and reduced returns.

What if, on a visit to an art gallery, the normally static exhibits came to life and put on a show for art lovers? That’s exactly what visitors to Skullmapping’s gallery in Leuven, Belgium, experienced in 2016. Unbeknownst to them, they had entered an augmented reality art gallery.

Titled “Gallery Invasion,” the experimental project by the artist collective Skullmapping started off with a projected AR animation of a graffiti artist spraying a canvas with an anarchy symbol. The canvas, however, is inhabited by a monkey who is not happy with the turn of events and ends up chasing the artist from one painting to the next.

Thanks to the technology used, the two figures could move fluidly around the space and interact with the canvases. “We’ve all become used to seeing mapping projects on all types of objects, but to see characters moving freely over multiple walls, ceiling and even floors with just one projector and a discreet setup is quite magical,” said Filip Sterckx, who was responsible for the direction and animation of the AR experience.

Although the AR performance was shown to a limited audience only, the video of the experience quickly went viral, getting 20 million views on Facebook alone.

Sometimes, there is not enough information about gallery exhibits, or the information is presented in a poor, uninteresting way that fails to engage visitors.

To combat this common issue, in 2019, the London-based art museum Tate Britain collaborated with Facebook Creative Shop to create an AR experience that would tell museum visitors the unique or untold stories behind some of the paintings exhibited. In this way, the Tate temporarily became an augmented reality art gallery.

Eight pieces were transformed with Facebook’s Spark AR platform to give museum-goers more context and background. To activate the experience, visitors had to use the camera in the Instagram smartphone app to scan Tate’s Instagram name tag. A welcome message and a map guiding users to the AR-enhanced paintings then followed.

When viewed through the Instagram app, all of the paintings came to life. For example, the piece ‘Fishing upon the Blythe-Sand, Tide Setting In’ by Joseph Mallord William Turner, which had previously been torn apart and restored, showcases a cat (Turner owned seven cats) using it as a cat flap, thus tearing it once more. Similarly, another painting, ‘Carnation, Lily, Lily, Rose’ by John Singer Sargent, demonstrates the passing of time.

How do you exhibit artworks that are located thousands of miles away? The art gallery Galloire has found a way. Based in Dubai, Galloire is the first augmented reality art gallery in the region, offering art lovers and collectors a means of seeing works in AR by artists that are not currently holding their exhibitions in the Middle East (developed by Poplar Studio).

The first exhibit, by the artist Nick Veasy, is called ‘Beneath’. As the name suggests, it shows what truly lies beneath the surface of everyday objects like supercars and high-fashion accessories, as well as human beings. This and exhibitions that will follow can be accessed in augmented reality via a smartphone.

Well known for its innovations in consumer tech, Apple is no stranger to the art world, either. In 2019, the tech giant collaborated with New York’s New Museum and famous artists to launch a cross-continental AR project that delighted people in cities like London, Paris, New York, San Francisco, Tokyo, and Hong Kong. Aptly called [AR]T, the experience consisted of an interactive walk that featured the works of seven contemporary artists such as Nick Cave, John Giorno, and Cao Fei, connecting participants to public spaces like London’s Trafalgar Square.

For example, one experience, titled ‘This Is It’ and created by Nathalie Djurberg and Hans Berg, took participants on a quest in Central Park. Speech bubbles with directions (“Around the corner, around the next bend”) led participants to a patch of grass surrounded by trees, where, in a hollow tree, they were treated to a unique art scene that resembled a digital fairytale. Within this AR fairytale, users were tempted with superficial human desires and put on trial by a wolf and his human friend. Another experience, ‘International Liquid Finger Prayer’, had participants chasing an elusive blob-like entity, whereas ‘Through’ encouraged users to step into a black and white world with no perspective.

In places where the [AR]T experience was not available, people could nonetheless visit Apple stores where they could use the [AR]T Viewer app, to take part in an interactive AR experience called Amass that filled the room with “Icon Elements”.

The augmented reality art gallery, museum and retailer of the future

The pandemic has highlighted the need for tourism brands in the art world to invest in new technologies like augmented reality. However, as demonstrated by the examples above, some of the most future-forward brands have been using AR long before the virus shut down the world.

For museums, galleries, and retailers that want to engage younger audiences and enhance the visitor experience, incorporating AR into their displays and offerings is a no-brainer. Consumers are already prioritising tourism brands that are integrating digital technology into their exhibition spaces. These preferences are only going to grow stronger in the future.

To ensure that you don’t get left behind, start planning your AR strategy today. Regardless of whether or not you know the next step you want to take, the team at Poplar Studio can help you design an AR experience that delights your visitors and keeps them coming back for more. Ready to get started? Get in touch with us today. 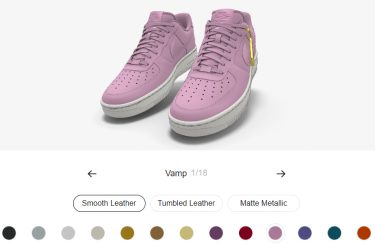 How a 3D product configurator can grow your e-commerce store 

£178 billion. That’s how much online retailers lost to returns in 2021. To put it another way, for every £823 million in sales last year, around £135 million worth of goods were returned.  For e-commerce stores, returns have always been a huge problem. Studies show that 20% of products bought over the internet end up...

Augmented reality in 2020 is more than just a trend. It has yielded real results for brands, and kept consumers coming back for more. AR is a powerful tool that consumers no longer just desire, but expect. Brands who have implemented AR in retail, education and healthcare are now reaping performance benefits and seeing increases...